People outside of the Capital Region typically don’t think of it as home to a startup scene. They would be wrong – the work by the companies highlighted here proves that.

The Albany Business Review’s first Inno on Fire showcases some of the Capital Region’s most promising startups in several categories. And it spotlights a coworking space that’s been home to some notable Capital Region startups over the years.

Two startups on the list are focused on next-generation electronics – a growing speciality of the Capital Region. Another company is growing in the niche entertainment industry, and there’s one whose canned cocktail is available in stores throughout the Albany region and Berkshires.

All are good representations of the variety of ways that Capital Region entrepreneurs are working to solve problems or fill gaps in the market. 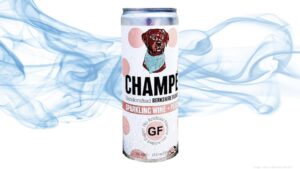 Champé Handcrafted Berkshire Bubbly has sold thousands of cans since its first product was released in May 2021. That product — a bellini made with sparkling wine and peach juice — is sold at more than 40 businesses in the Berkshires. And it just entered the Capital Region market through a partnership with DeCrescente Distributing Co. It’s now available at a dozen liquor stores in Albany, Troy, Malta, Saratoga Springs, Greenfield and Lake George. It’s also now being served at McGeary’s Irish Pub in Albany.

The canned bellini is made in the Finger Lakes with wine that comes from the same region. The 5% ABV beverage contains just a few ingredients, without any added sugar or artificial flavoring.

Champé is continuing expansion with plans to enter New Jersey, Rhode Island and Maryland via distributor. And it’s working on a new flavor: a mimosa with sparkling wine and orange juice.

Its mascot is drawn after the DiBuono’s dog, Berkley Valentine, and the company is targeted at creating a brand associated with celebrations and memory-making.

NoMIS Power Group is a good example of the multiple Capital Region startups working on next-generation products for the semiconductor industry. Born at SUNY Polytechnic Institute, the startup is developing a next-gen power semiconductor expected to be capable of processing and controlling high voltages needed for applications like electric vehicles, EV fast-chargers, subways, airplanes and large industrial motors. Made with a newer silicon carbide material, the semiconductors are expected to be lighter and less expensive to build and run. NoMIS is also designing future generations of its own product with about $1 million in governmental grants. It recently expanded its presence in the Albany Nanotech Complex in order to access the technology needed for that development.

Meanwhile, companies have contracted NoMIS to help design parts of their own products. That has created cash flow to fund what the startup sees as its first entry into the market. NoMIS is finalizing an exclusive license agreement for a piece of hardware developed at SUNY meant to improve reliability of chips in the automotive market. 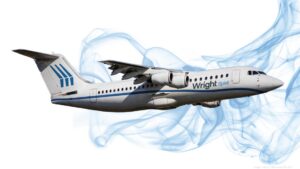 Wright Electric is developing an electric aviation engine to be used with a BAe 146 aircraft.

Money raised: $10 million in government grants, other undisclosed money, including from the Y Combinator startup accelerator

Wright Electric started in Boston, then moved to California and then moved to the Capital Region in 2020. Now, it’s moving into a 6,000-square-foot space at the STEP in Malta. Wright Electric is developing electric engines for commercial jets, focused on those with 100 seats that complete flights of about one hour. The electric engines will go inside the four-engine BAe 146 aircraft, to be branded as Wright Spirit. The plan is to have the Wright-outfitted plane on the market by around 2026-27. There will be flight tests over the next few years. The startup says the engine is about 10 times more powerful than the electric engine inside a Tesla and is lightweight, highly efficient and quiet. The team is also working to turn the motor into an ultra lightweight generator.

The startup moved to the Capital Region to better access the talent here – many of its employees had come from the Albany region. The group of 25 employees includes several GE veterans.

Employees: More than 50 employees and contractors

Inspect Point doubled its seven-figure revenue and added hundreds of new clients in 2021. With a venture capital raise of $28 million in early 2022, the startup is working to scale up internationally. The company plans to double its current revenue as well as its number of clients and workers over the next 18 months. The new investment is going toward expansion of each of its divisions, particularly sales and marketing. In September 2020, there were 10 employees and about 300 customers. Now, there are 50 employees and more than 450 customers.

Inspect Point’s software allows fire protection companies to manage building inspections, proposals, invoices and service tickets through a cloud-based application. The startup has customer companies of various sizes throughout North, Central and South America. It is available in English, Spanish and Canadian French. The fire inspection industry tends to move slowly regarding the use of new technology, but it got a big boom in business during the pandemic because fire inspections needed to continue even though people were working remotely. 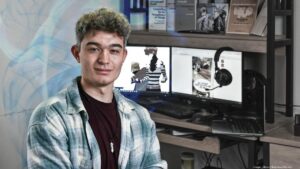 From his Skidmore College dorm room, Dylan Telano has built a platform for digital comics that now has 800,000 unique monthly users. VoyceMe is an online platform and app where authors can share manga – Japanese-style comics – and webtoons, digital comics that originated in South Korea. VoyceMe has published about 8,000 story chapters and is continuing to grow. Any creator can post work, but VoyceMe partners with certain authors to help produce work, similar to platforms like YouTube and Netflix. A subscription-based version of the platform is in the works.

As of recently, VoyceMe is the official English producer of Ultramarine Magmell, a manga that was adapted into a show that’s now on Netflix. It has also signed contracts with anime influencers including Dave Ardito, a German with 8.9 million followers on TikTok.

VoyceMe investors have included Matt Finick, senior vice president for Marvel Studios when it was acquired by Disney in 2009, and Greg Smith of Evolution VC Partners, an early investor in Beyond Meat and JUUL Labs. 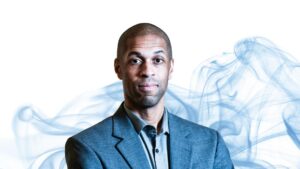 The software startup GyvLink is working on an updated version of a platform meant to more easily connect nonprofits with individuals and corporations to ask for specific in-kind donations. The goal is that the platform gets donors to purchase items that are actually needed rather than wasting money on products that may go unused. And, the goal is that corporations can alert nonprofits about the supply of particular items that can be donated. On top of in-kind donations, the updated version of the app will have a capability for nonprofits to match with volunteers.

GyvLink this summer is one of 25 U.S. startups in the first cohort for the Amazon Web Services (AWS) Impact Accelerator for Black Founders. The GyvLink team is learning from AWS executives about ways to develop the software and business, and the team is making connections that could prove helpful in the future. Among the startup’s new customers is a nonprofit in Kenya, which had a need that was filled quickly by a donor in New Jersey. 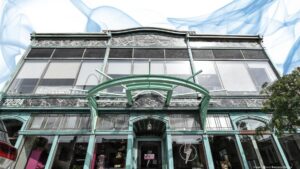 Troy Innovation Garage has been home to several startups since it opened in 2015.

The Troy Innovation Garage is the firstborn coworking space of Aurelius Coworks. Since it opened seven years ago, it’s been home to some of the Capital Region’s most significant startup companies. Big news from tenants over the past two years: InspectPoint raised $28 million in venture funding; software developer Nuvalence has experienced significant growth; Simplecast was acquired by Sirius/XM; and Tom Nardacci’s Gramercy Communications was acquired by The Martin Group. High-growth companies have collectively raised $50 million over the last few years. Before the Covid-19 pandemic, there were 125 members. Now, there are 165.

Besides those companies, the coworking space has been a place for freelancers and microbusinesses. There’s a new six-week accelerator program based at the space for small businesses in the Capital Region. There will be more in-depth accelerator and incubator programs announced in the future.

Restoration of the building’s exterior façade and signage on Fourth Street will be finished by the fall.