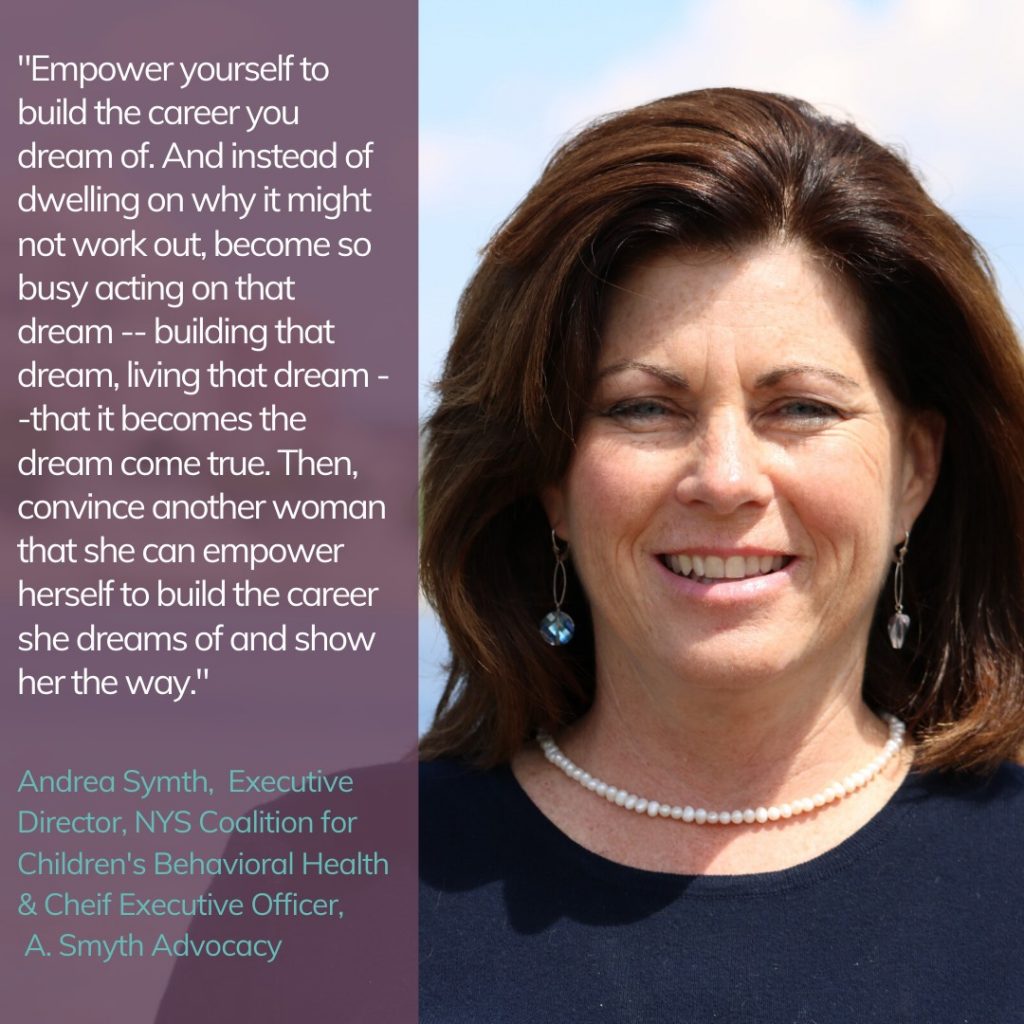 March is International Women’s month, so we are featuring a rockstar of a woman and member here at Bull Moose Club, Andrea Smyth. Andrea is Executive Director, New York State Coalition for Children’s Behavioral Health (NYSCCBH)and CEO for A. Smyth Advocacy.
After graduating from the University of South Florida, Andrea accepted her first job as a Legislative Director in the Florida House of Representatives –and that is where she found her passion for government relations. She then went on to apply to graduate schools in Texas, Florida and Upstate New York. Since housing costs were affordable in Albany at the time, she decided to pursue her Masters in Public Administration at Rockefeller College of Public Affairs & Policy.
Andrea interned at the Division of Budget for two years to start off her career in the Capital Region. She took her first job with Association of Counties as a Human Service Staff Analyst, and was soon promoted to Administrator. After her job with Association of Counties, Andrea worked for a Home Care Association as a legislative director and thus began her role in health and mental health care. She worked for UJA Federation of New York as a State Policy Director.
After working for some years, she started to feel that small non-profits did not get the best service from large lobbying firms. Andrea thought she could do better focusing on women and children issues, so, in 1999 with three children under the age of 8, she jumped from being securely employed to being her own boss and never looked back. This was the start of A. Smyth Advocacy.
With four clients, she shared an office with another lobbyist in downtown Albany. Since her shared office space days, association management has changed a lot, and everything can be done virtually from meetings to bill tracking, planning, etc. so having a downtown office space was not a priority until 2019. Her business continued to grow as well as her role with NYSCCBH, and she needed a place in downtown Albany with close proximity to the Capitol to access meeting and conference rooms, quick last minute printing, and secure fast internet. This led her to join Bull Moose Club. “Bull Moose Club has been a dream come true for high quality meeting space and tech support. My board appreciates all the amenities and proximity to the Capitol,” Andrea says.
A. Smyth Advocacy continues to take work as a subject matter expert consultant and she helps design programs, begin program strategic partnerships for providers in the children’s mental health field. Andrea is considered a subject matter expert and has been appointed to numerous advisory committee boards and appointed to the Governors Medical Redesign Team under Children’s Subcommittee. She received the NYS Human Services Women of Distinguish in 2019.
We are so happy to have this #ChangeMaker in our community!
« Previous Post
Next Post »