Tom Nardacci is hoping that he provides more than just a good view of the Capitol when he opens up the Bull Moose Club this summer.

Nardacci, who owns the Troy Innovation Garage, a coworking space for creative economy workers in downtown Troy, is set to begin interior construction of the Bull Moose Club, which is a coworking space that will target Albany’s political class.

The Bull Moose Club is located on the fourth floor of 150 State St., just steps from the Capitol building. It is named after the nickname given to the Progressive Party started in 1912 by former New York governor and U.S. president Theodore Roosevelt.

The proximity to the hallways of power and politics is what Nardacci believes will draw in lawyers, lobbyists, nonprofits and companies that have business before the state. 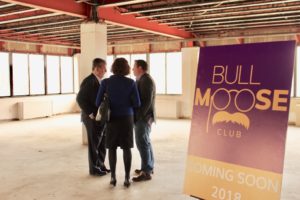